Please share your experience and findings in this thread.

In order to obtain the password for the race, please register at the following link:
https://www.simracinghub.com/srhf1/srhf1-calendar/273-srhf1-2020-11-gbr/registration

After registering, you should receive a confirmation email that includes the password for the race.

All results will be posted on the official event page:
https://www.simracinghub.com/srhf1/srhf1-calendar/273-srhf1-2020-11-gbr

Drivers to serve penalties in this race:
- Cory Mackey (race ban)
- Richard Haynie (start from the back of the grid)
- James Kim (10-grid spots)
Tweet
Responses (33) Juan DelCastillo
Accepted Answer Pending Moderation
0
Votes
Undo
I will keep it simple. My defence is that I was racing for position with DC and I was holding my right line to make him pass me on the left side and all of a sudden I was hit from behind and got spun and lost rear wing.
Comment
There are no comments made yet. David Carney
Accepted Answer Pending Moderation
0
Votes
Undo
I was beside you. You didn't get hit from behind. You squeezed me onto the grass.
Comment
There are no comments made yet.

Punted from behind. can see from my view that I chose some pretty on point apex speed due to such a tight entrance of a fast turn. Would like my position back as I dont remember any legal pass from senor coop. Whether it was by accident or not, could have waited and made a legal pass.

I could go on about closing speeds I had the run blahs blahs blah... end of the day he was ahead I made a hash of it. My fault ban me before it's too late seriously though give me penalty sorry champ!
Comment
There are no comments made yet. Below you see Juan protecting the inside lane into Turn15 (green line) and Carney deciding to drive to the right side of Juan, into a lane that ends well before the braking zone of Turn15 (blue line). 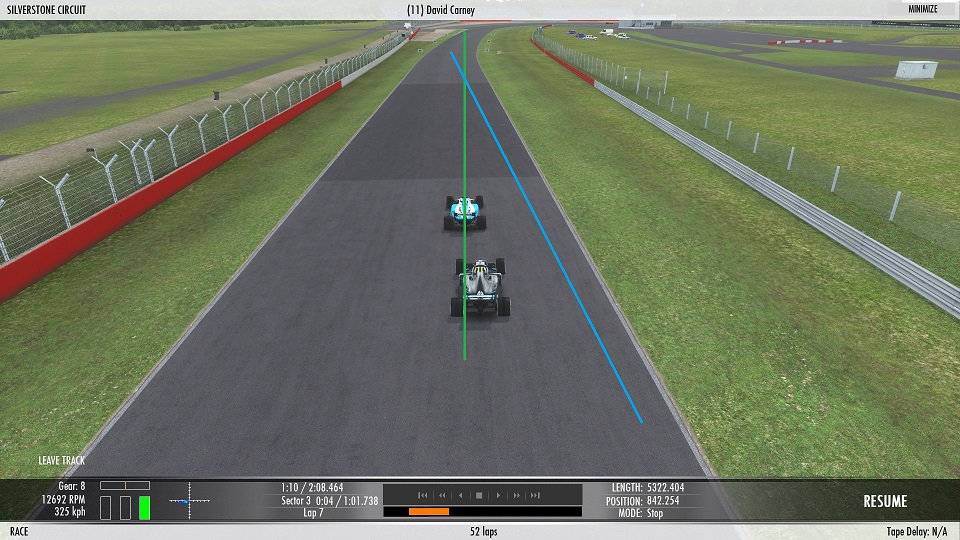 Below you see Juan's legal blocking of the inside lane to Turn15 (green line). 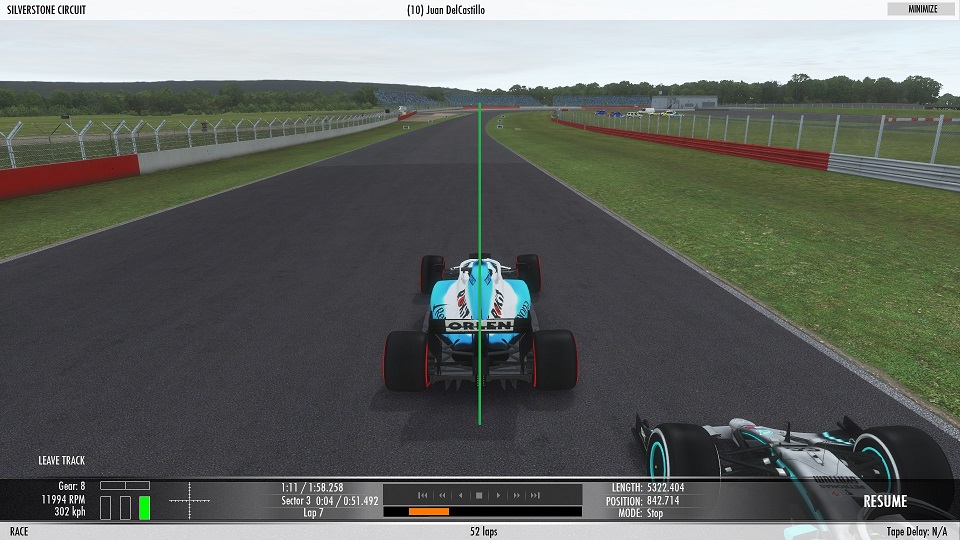 Below you see Carney's idea of a lane into Turn15 (red line). As you can see, this lane is only suitable for a lawnmower as it leads Carney onto the grass in a very short distance. Still, this was entirely Carney's own doing and decision making as he decided this move from well behind Juan. 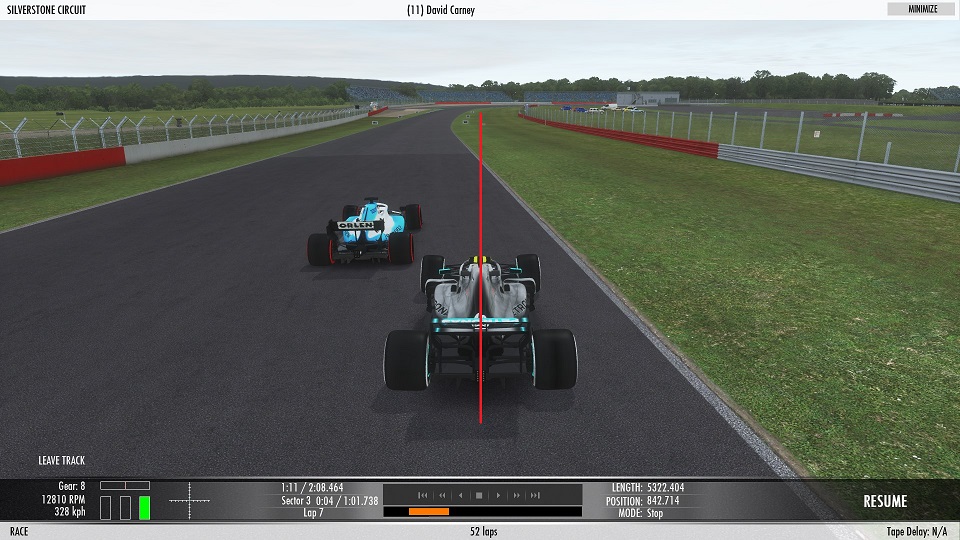 Finally, here you see the effects of Carney's decision as he, entirely by his own effort (without the force of another), drives his right side tyres onto the grass. From this point on, Carney never brings those right side tyres back onto the track before the two cars collide and crash out. 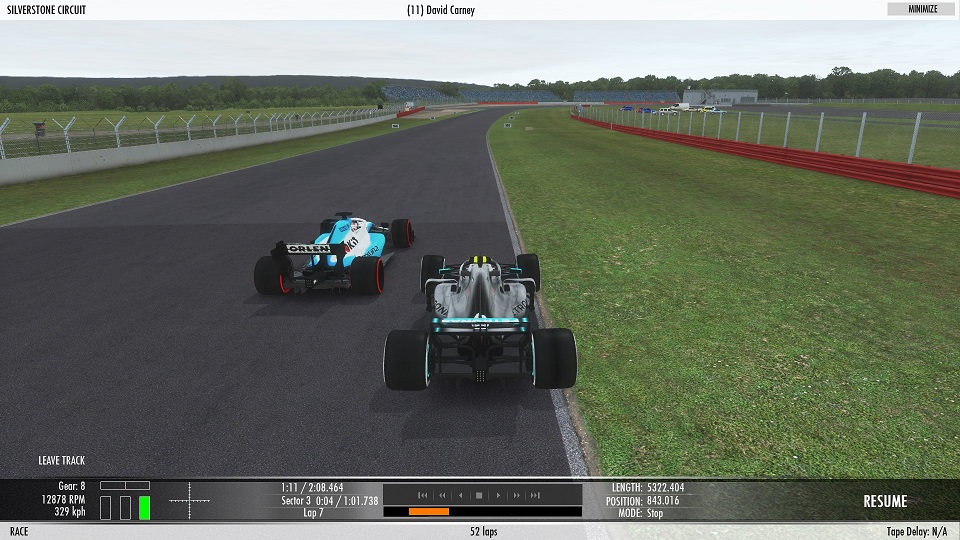 Yes, Juan did begin to move right at the time of this image, which was poor awareness & decision on his part. However, the only way this idea of Carney was ever going to work is if Carney would've been able to start forcing Juan to move left and give up the inside lane which he was rightfully blocking to begin with. With such little length of track and little time at this high-speed section, it's unlikely a clean result would've ever come of Carney's decision.

As I steward on this case, I found this to be a racing incident between the two parties and I gave equal rating to both. Each of them could've made better awareness and decision making to avoid a collision, although I felt that the circumstances and factors that led to the collision began with Carney's decision to go for a line that never existed. I definitely don't believe a post race penalty for Juan is a fair result.

I find it a shame that it seems some stewards are more interested in finding the quickest and easiest place to lay blame with a penalty instead of investigating deeper and factoring out the circumstances and dynamics of which these incidents typically occur. I hope the stewarding of 2021 can be lead with new light so we can have more racing and less post race nonsense.

No digging required when it's all right there on the surface. Richard Haynie
Accepted Answer Pending Moderation
0
Votes
Undo
I don't think we're supposed to go public with our stewarding calls, but since you opened the door...
I agree with you. I didn't think Juan deserved a penalty. I thought he made it obvious he wasn't giving up the inside right line.

I don't think we're supposed to go public with our stewarding calls, but since you opened the door...
I agree with you. I didn't think Juan deserved a penalty. I thought he made it obvious he wasn't giving up the inside right line.

David Carney
Accepted Answer Pending Moderation
0
Votes
Undo
I'm going nearly 30 km/h faster as well. So I would of blown by him easily.
Comment
There are no comments made yet.